The Faces in the Trees
by Diana Gruver

We walked over to meet her dogs. Our daughter heard them barking, and in response to her insistence, I nestled her in the wagon and we walked down the lane. It wasn’t the first time we’d met a neighbor because of her canine obsession.

We paused by the fence. An apple tree, dotted with the year’s last fading blossoms, spilled over the metal links.

As we talked with our newly acquainted neighbor, I couldn’t help but peer into the yard. It was edenic. Behind the small fenced garden in which she sat, lush grass spread to stone steps leading to the back of an old brick house. Towering over it all was an old maple tree, which cast an oasis of shade with its wide spread. I could hear the gurgle of a small fish pond near its base.

“What a beautiful old tree,” my husband commented.

Our neighbor grunted. “There’s a story behind that tree, you know,” she said. “There was a different tree there once. Back in those days, the couple who used to live here went through a nasty divorce.” She shook her head for emphasis. “She secretly bought the house out from under him at auction. He was so infuriated that he came back later that night and chopped the tree down—and the one in front of the house as well.”

I thought of the angry fury of his ax, of how naked the whole place would have been with a stumpy carnage at its heart.

She continued. “But you know, these trees are pretty resilient. After he cut down the original tree, this one sprouted from the stump.” She gestured over her shoulder. “And you can see what it grew into. It’s so big now, I don’t know how we’d cut it down even if we wanted to.”

After I graduated from college, I spend a year living in a group foster care home. My tiny apartment opened into the main hall of the sprawling house, and my kitchen was often full of children and teens in various states of cooking adventures, sewing projects, homework, and heart-to-heart chats. When I think back to my time there now, I am immediately transported back to that kitchen, with its small, slightly wobbly, wooden table. Some of my favorite memories happened there.

In the name of decor, I carefully wrote out the words of songs and Scriptures and taped them to the pale yellow walls. The one I got asked about most frequently hung in front of the kitchen sink, purposefully placed where I would see it throughout the day:

The Spirit of the Sovereign Lord is on me,
because the Lord has anointed me
to proclaim good news to the poor.
He has sent me to bind up the brokenhearted,
to proclaim freedom for the captives
and release from darkness for the prisoners,
to proclaim the year of the Lord’s favor
and the day of vengeance of our God,
to comfort all who mourn,
and provide for those who grieve in Zion—
to bestow on them a crown of beauty
instead of ashes,
the oil of joy
instead of mourning,
and a garment of praise
instead of a spirit of despair.
They will be called oaks of righteousness,
a planting of the Lord
for the display of his splendor. (Isaiah 61:1-3)

I needed these words held continuously before me. They were the words I needed to hear each time I heard another story of abuse or loss. They were anchors of hope as I witnessed the effects of trauma—and when I sat at that table exhausted and numb with my own depression. I needed them because they reminded me of the explosive hope of the Gospel—that I follow a God who brings life out of dead things. I needed a continual reminder that my hope isn’t only about freedom from spiritual brokenness, darkness, and captivity. It is also one of the ultimate, tangible restoration, redemption, and remaking of all things, in which justice and wholeness and joy will endure. As I walked among the wreckage of families and innocence and dreams, I needed to believe that resurrection was still possible.

So many times, a pair of dark eyes would seriously scan the words. “What does it mean, Miss Di?” they’d ask. And I would tell them. They’d heard plenty of people tell them about Jesus—usually pale-skinned Americans like myself, visiting for a week, intent on “making a difference for Jesus.” Just ask Jesus into your heart, they were told, and then you’ll go to heaven. But they didn’t just need a message about a God only interested in whisking them away after death. They needed a message about a God who was present with them in suffering. They needed a God who hated the injustice and cruelty they’d suffered—and sent his own Son to set in motion a Kingdom that would finally and fully eradicate all evil. They needed to know their ashes were not the end of the story.

There were plenty of things I’m sure I did wrong during my time there. I was young. I didn’t know as much about trauma as I do now. There were things I should have seen that I was blind to. But I think that maybe, just maybe, this was one of the things I did right. I was staring at ruins, at stumpy carnage. But with every conversation about the Gospel, every time they shared their dreams and we talked about how they could move toward them, every time we talked about finding men who would love them and not abuse them, every time they opened up about something from their past—I could hear Isaiah’s words. I could envision the roots growing deeper, I could see the little sprouts of new growth forming. Oaks of righteous. Strong. Deeply rooted. Welcoming and refreshing others under their shade. A display of God’s redeeming glory.

So on that day, in my neighbor’s yard, I couldn’t stop staring at that tree—because I saw their faces there amidst its branches. And I prayed it might be so. 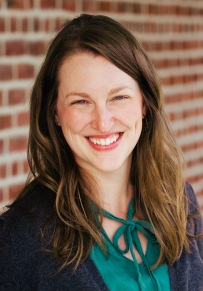 Diana Gruver (MA, Gordon-Conwell) writes about discipleship and spiritual formation in the every day. She is the author of Companions in the Darkness: Seven Saints Who Struggled with Depression and Doubt. Diana lives in Pennsylvania, where she can often be found singing in the kitchen with her husband and ever-curious daughter. You can connect with her at www.dianagruver.com, or on Facebook or Twitter.

I'm a simple girl who loves words, God, my family and nature. It is my hope to inspire everyone, whether it's with a smile, encouraging words or just a listening ear. View more posts